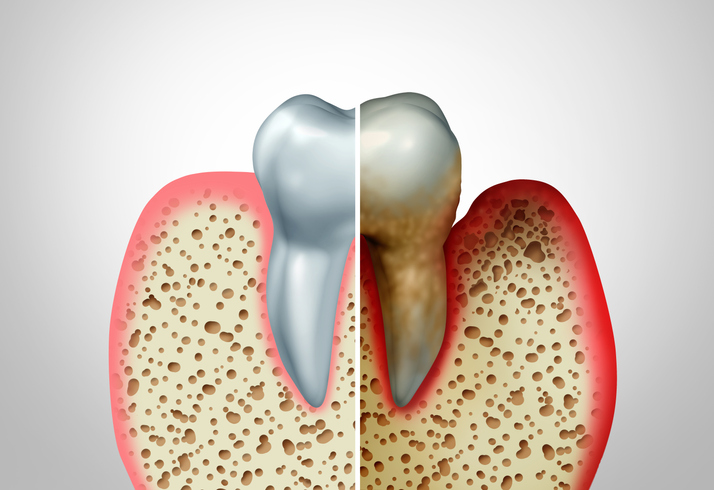 According to the World Health Organization, more than 3.5 billion people suffer from dental diseases. Periodontitis, or severe gum disease, affects nearly 10% of the world’s population. Diet, tobacco use, and the harmful use of alcohol play a role in many of these cases. However, one recent study points to genetic factors playing a critical role in nearly half of all cases.

Cytokine and the Inflammatory Response

Cytokines are small proteins that the body uses to send our cells signals to do certain things. These proteins are vital to our immune response and the production of white and red blood cells in addition to other types of cells. When they’re released, cells leap into action to either make blood, make other new types of cells, or launch an inflammatory response to battle infections. Sometimes, cytokine response can be too weak or too strong, leading to a host of health problems.

Up to 30% of humans have some sort of genetic factor that leads to problems in the cytokine response. Not only do these people suffer from chronic pain and inflammation, lupus, hormone disorders, and other diseases, they also suffer from predisposition to periodontitis. People who suffer from improper cytokine signaling are up to 20 times more likely to develop advanced periodontitis, and they have earlier onset disease that progresses more rapidly than others. For these patients, battling periodontal disease requires a different and special approach.

You Can Get Tested

Do you suffer from periodontitis? There are newly developed DNA tests that can tell you whether you’re more susceptible than others to get some sort of periodontitis. The commercially available test can be taken at home or at your periodontist’s office. If you have multiple members of your family who suffer from dental diseases, it might be advisable to take the test. It can influence your medical and dental care and how to approach it successfully.

Healthy gums are pink, uninflamed, and don’t bleed when brushed and flossed. Your teeth shouldn’t move when pressed forward or backward. Clean and healthy teeth, gums, and tongue have a pleasant, clean smell with no hints of decaying food, acid reflux, or diseased teeth. Unhealthy teeth have an odor that’s immediately identifiable to a trained professional. Teeth will move when pressed and bleed when brushed, cleaned, or flossed.

Periodontitis infects the gums and gradually breaks them down. In turn, they will shrink, leaving teeth wobbly and unsupported. Even if teeth are clean and undiseased, the gums retract and decay. Gum disease can be caused by several different factors that require unique approaches to be effective.

Plaque is the primary cause of periodontal disease. The best approach to fighting periodontitis in these cases is properly brushing teeth at least twice daily and flossing at least once per day. Keeping plaque at bay is a constant battle, and neglecting oral hygiene can have serious long-term health consequences.

Before the age of 35, tooth decay is the leading cause of tooth loss. In patients 35 and older, periodontal disease causes more tooth loss than cavities. Up to 75% of adults will lose teeth due to periodontitis in their lifetime.

Periodontitis starts with gingivitis, which is treatable and reversible. It’s almost always caused by poor oral care. Forming better oral care habits can be done at any age by using apps and timers to act as a reminder to brush and floss.

The advancement of gum disease can be accelerated or decelerated by a number of different factors. However, the bacteria present in most plaque and tartar is to blame for the breakdown of gums. The best way to avoid gum disease is to brush, floss, and get regular dental exams and cleanings.

There are a host of diseases and conditions that compound periodontal disease. If you suffer from any of these, be aware that you’re at risk for developing gum disease:

The Progression of Periodontitis

In time, plaque that’s left on teeth turns to tartar, which spreads below and above the gum line where it’s much harder to get rid of. Bacteria irritate the gums and cause chronic inflammation, which takes a toll on the immune system. Your body’s natural immune response to infection is to kill it with inflammation and fever, but in so doing, your body also attacks its own tissues and bones that support the teeth. The gums and bone recede and pockets form. These become abscesses that further the disease process. The infection in these pockets can spread throughout the body and lead to severe health consequences. In time, the teeth will need to be removed or they’ll fall out on their own.

Sometimes, periodontal disease is only detected by an exam and it doesn’t cause unpleasant symptoms. This is especially true for people who’re genetically predisposed to periodontitis. If you have a family member who has gum disease, it’s a good idea to get regular dental exams. Sharing foods, drinks, or kisses can spread the harmful bacteria that cause gingivitis and periodontal diseases. Refrain from kissing or sharing food and drink with someone with inflamed gums.

If you have heart disease, diabetes, certain types of arthritis, osteoporosis, or respiratory disease, it’s especially important to get checked for periodontitis and maintain good oral hygiene practices. If your teeth appear to be too short or you have a “gummy” smile, or if you’re missing one or more teeth, you should be evaluated for bone and gum decay. Regular dental care and good oral hygiene are imperative to fight periodontal disease, even if it’s caused by genetics. Contact Philadelphia Periodontist Dr. I. Stephen Brown today to make an appointment to be evaluated for periodontitis.